That kind of people never change.. 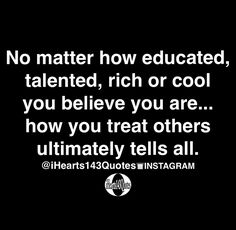 I have lived long enough not to be shocked and surprised by people acts. However, now and then I came across people who are so insensitive, selfish and arrogant. Here in this work place I have met many of those characters who are still kicking and believe that they are on the right tracks but apparently they are bullying others, misjudged people around them, taking advantage and the worse case scenarios heartless.

The boss is not yet officially gone from this office but the seconder is impatiently wants to go in..bringing the lots. The other head is also excitedly announcing memos which makes the boss feels that he is obstructing the way, thus making him left the group all of the sudden. I am watching all these unfolded in my own eyes..feel sad and I could feel the sadness of the old boss. And during the meeting just now, I saw they used it as a joke and laughed away. I felt sick watching them.

Second incident, last night, I received a message..not work wise but more like gossiping things..I replied but later I felt tired and drowsy. I read the next message but did not replied because I wanted to sleep and it was not important too. Then early morning I received more messages from that person telling me that she felt bad that I did not reply to her messages and I have changed not to be same person when now I have worked in the office. My God..why people should be so insensitive..I was at home with my family..and after breakfasting I was so tired and not so interested in gossiping. For me, she is the one who never change..still being the same person..heartless, insensitive..harsh in words used and arrogant.

Years have gone by..still holding the same attitude. may be you are great in your work but that's not what count finally..the only thing that people remember about you long after you have gone is the hearts that were hurt by you..

Grow up fast because its quiet late now.

Happy Birthday to me...

Never I have written about my own birthday..

This time I will..

This year I celebrated the day with a mixed feelings..sadness, broken hearted, self awareness, gratitude..

Sad because the day should be more memorable with his presence..which did not happen..

Broken hearted because of the empty promises..

Self awareness because I know I am old enough to be in this mess..

Grateful because all along this long journey I have HIM...

I am nobody to you..just a somebody in my small family

Plain woman..just wanting to jot down some important events in my life..visitors are welcomed to read and to leave comments..